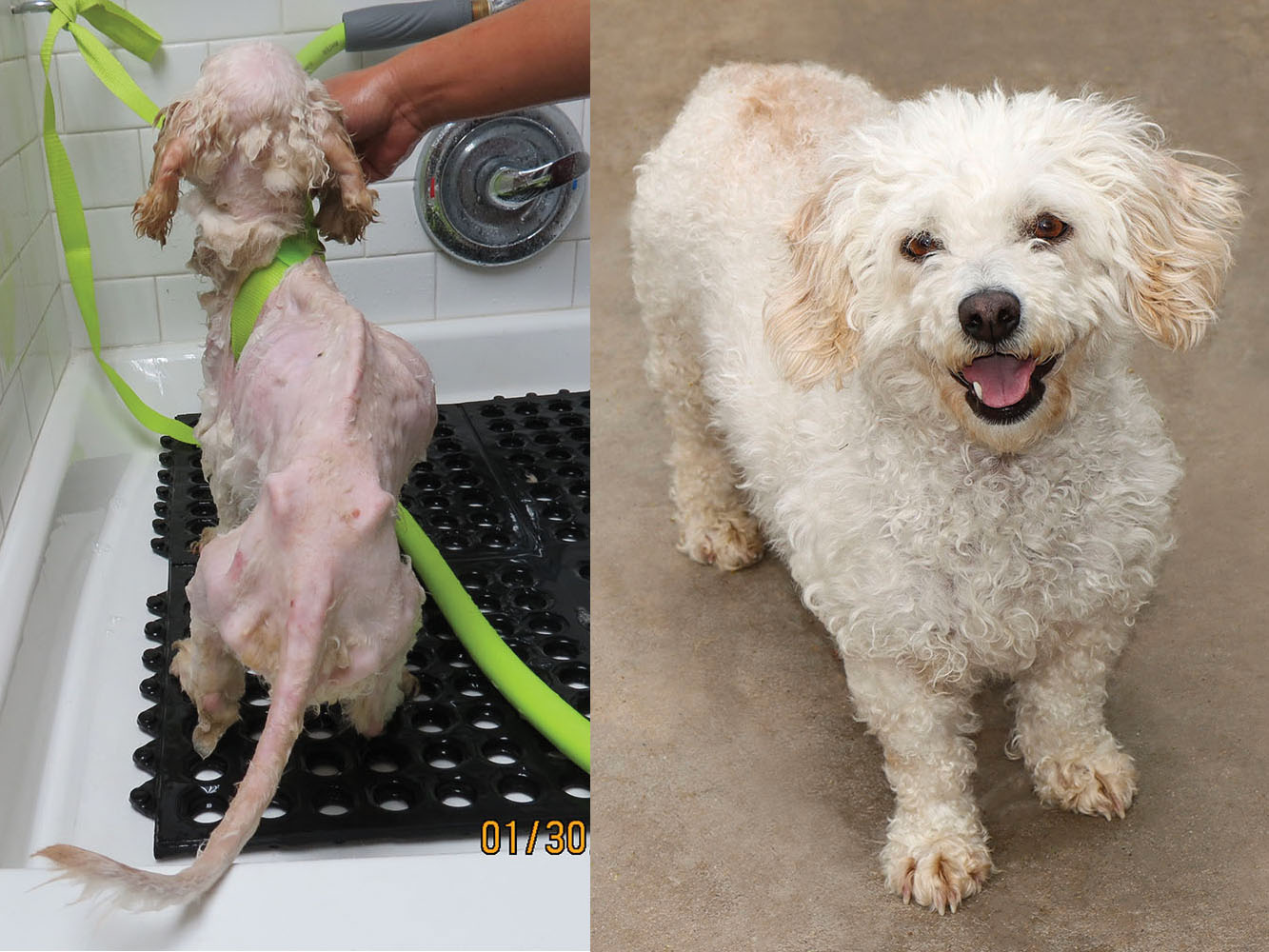 In January of 2022, Humane Officer Utter responded to a complaint regarding two dogs at an address in Oxnard. The complaint stated that there was a severely matted small dog kept inside of the house and a husky living in the side yard of the residence. After discussing concerns regarding the care of the dogs, the owner decided to release ownership of both animals to the Humane Society. 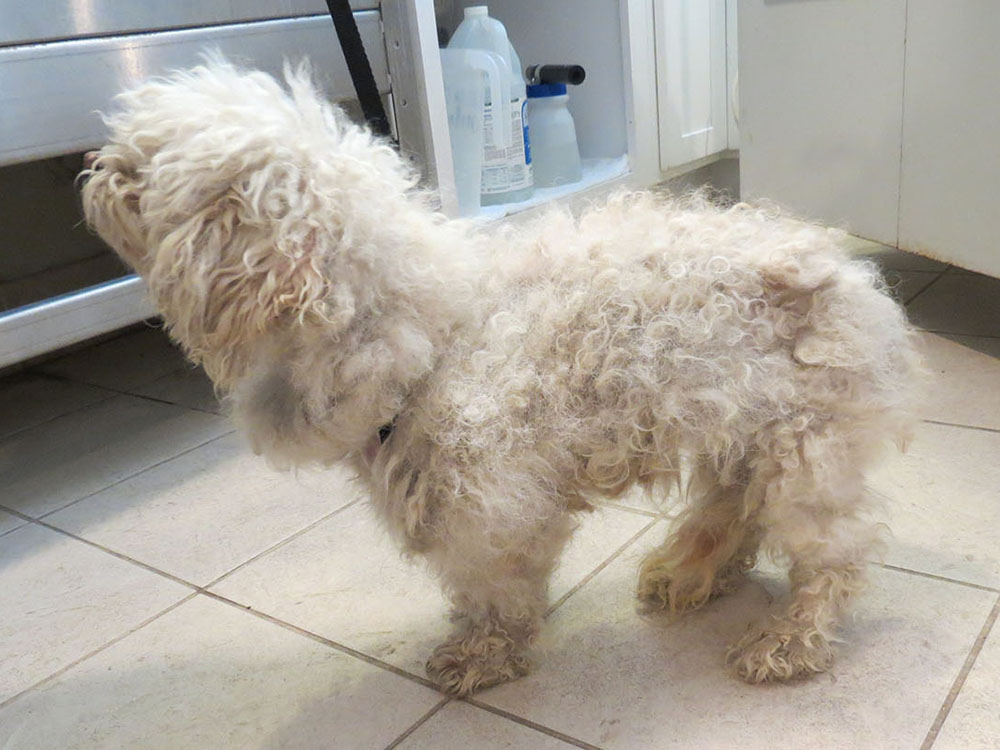 Above: Star when she arrived at the shelter before grooming. 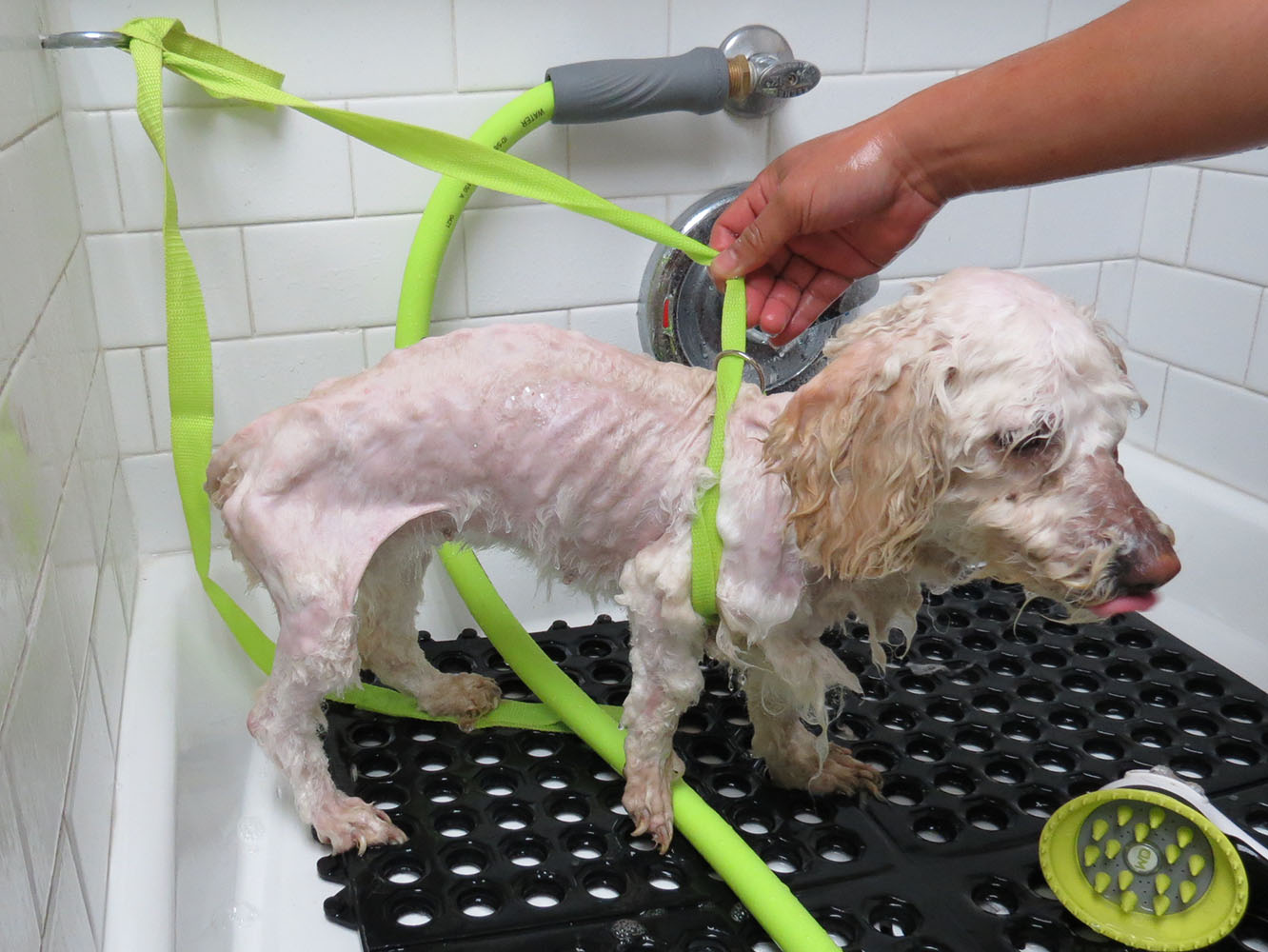 After returning to the shelter, Officer Utter got to work bathing and shaving the small, severely matted dog named Star. As Utter shaved Star, it became apparent how severely emaciated she was. Every rib, hip, and backbone could be seen protruding through her skin (above). Utter decided to have a professional groomer complete shaving her and took Star to Max Grooming in Oak View. After learning what the little dog had gone through, the staff decided to groom her for free. 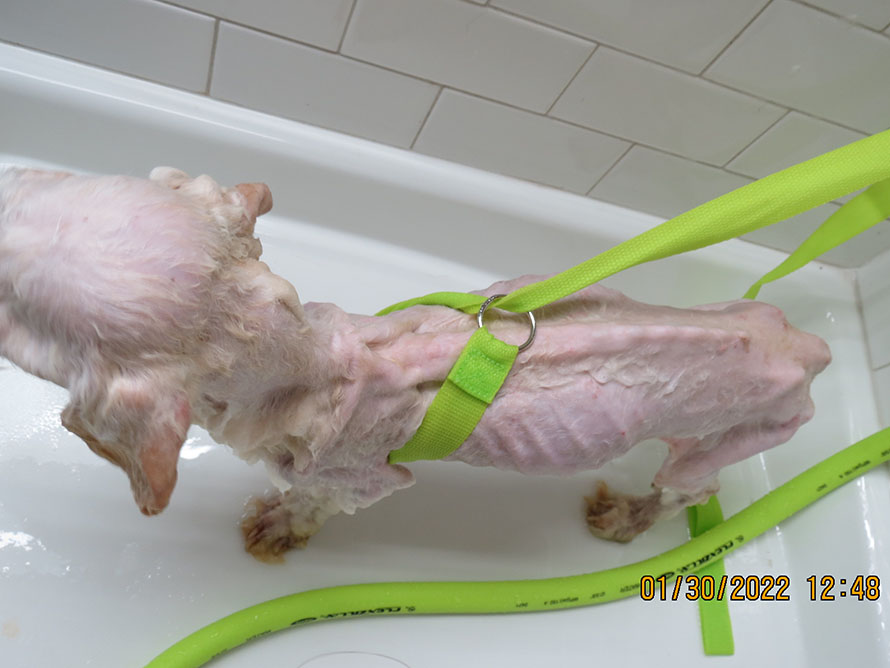 Senior Humane Officer King then contacted Dr. Steve Sallen, at Ojai Village Veterinary Hospital, who was able to see Star immediately. At the office, Star weighed a heartbreaking 7.51 lbs, which is about half of what she should weigh. Dr. Sallen stated she had a Body Condition Score (BCS) of 1 out of 9 on the Colorado State University body condition score. A BCS of 5 is considered normal and healthy.

Over the next week, Dr. Sallen performed multiple tests to determine the cause of her emaciation. He concluded that her emaciation was caused by Exocrine Pancreatic Insufficiency (EPI). This disease causes the animal's body to no longer digest and absorb nutrients from food properly. Left untreated, EPI can cause severe emaciation in animals. Properly treated with pancreatic enzyme supplements, an animal can maintain a healthy weight and life. According to Dr. Sallen's findings, any reasonable person who owned an animal with the level of Star's emaciation would immediately seek medical care. 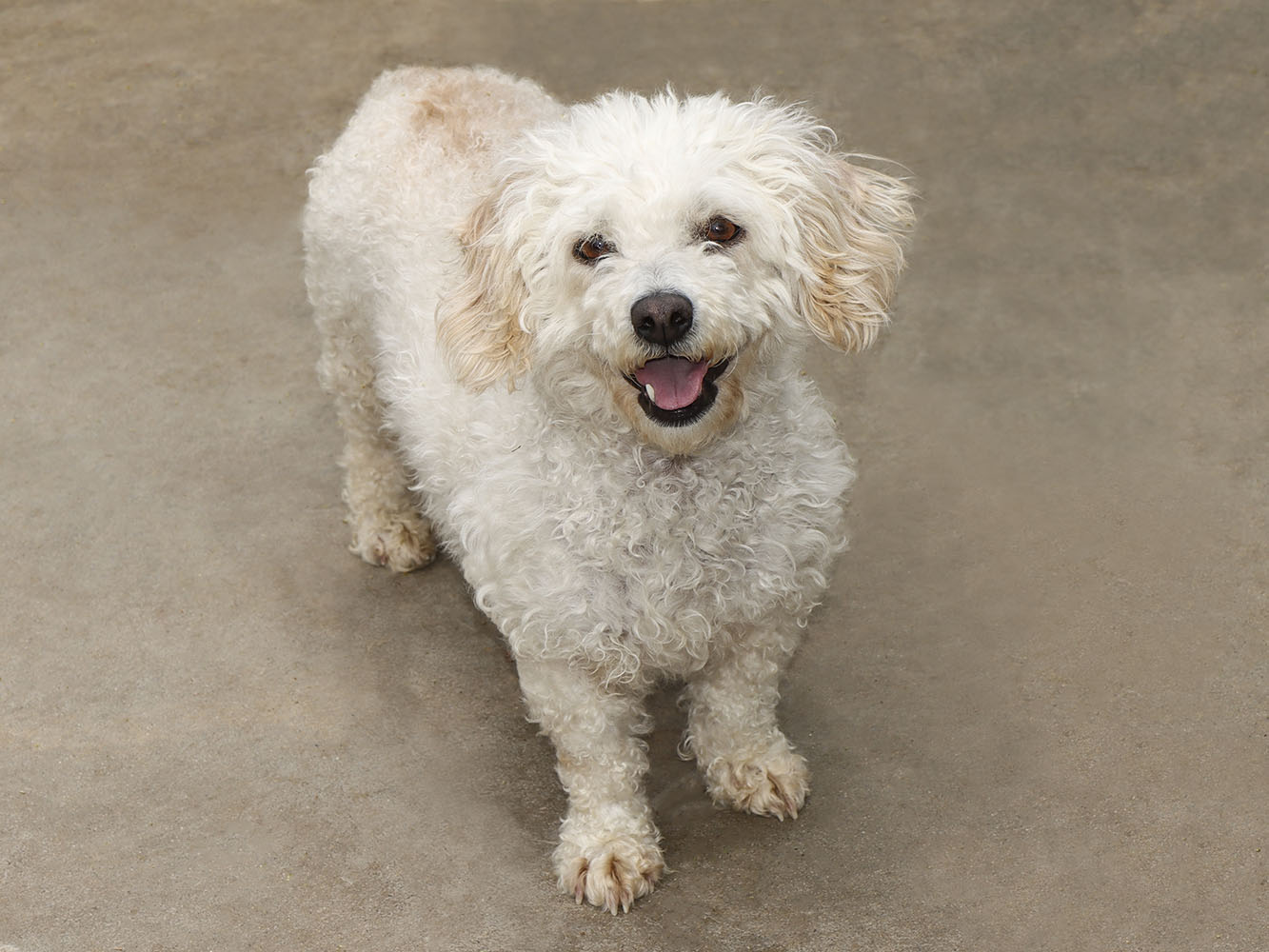 Above: Star now, happy and healthy!

It has been several months since Star began her journey with the HSVC. She eats small amounts several times a day with her supplement added. Thanks to our staff, we are happy to report she has gained weight and is now a healthy 15 lbs! Star has a resilient spirit, and we continue to watch her succeed daily. 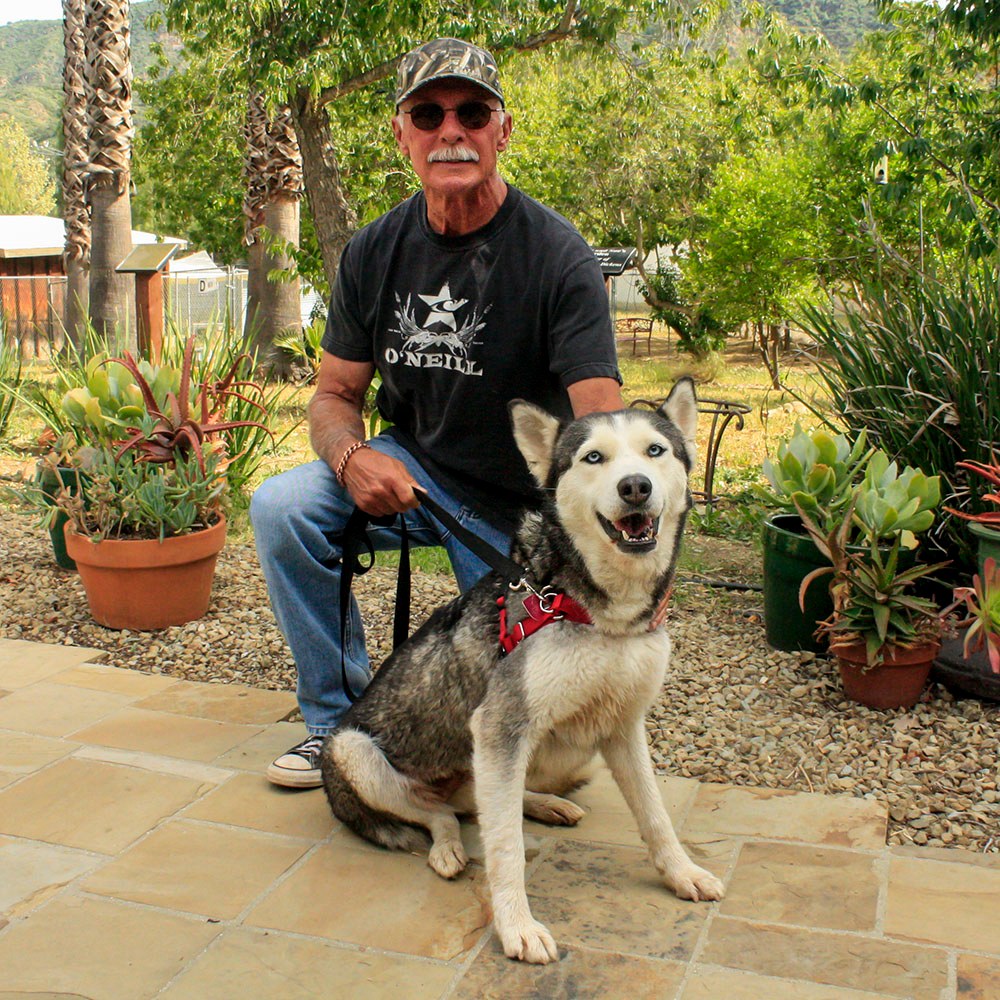 Above: Luna with her new dad, Bruce, on her adoption day.

The second dog at the property, Luna, was also underweight when she arrived with Star. We're excited to share that Luna was able to fully recover and has since been adopted into her forever home! Star is still patiently waiting for her forever home. If you are interested in giving this sweet girl the loving home she deserves, stop by the shelter or call us at 805-646-6505.

Now we need your help! Animals like Star require immediate and constant care, which can be expensive. Please consider donating now to our shelter so we may continue providing emergency care to animals in need. Click the button below to donate.