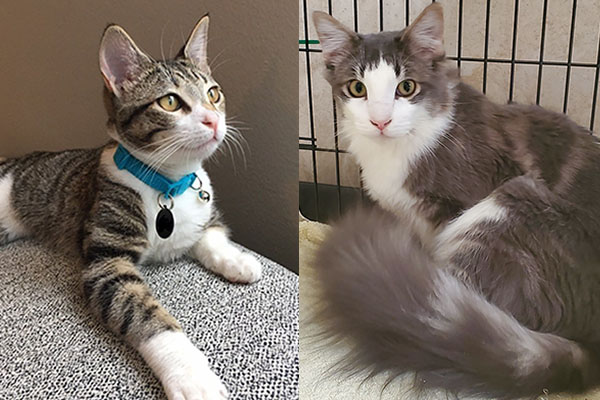 A two-for-one success story! Ojai residents Tammy and Ken came in to the HSVC with the intention of adopting Zinger the cat. Cutie, however, had another plan in mind.

In early March, a couple came in to the HSVC in hopes of adopting a cat. The couple, Tammy and Ken, visited the cat room and bonded with a young female named Zinger. The pair quickly decided they wanted to make Zinger a part of their family and planned to come back the next day to adopt her.

Tammy and Ken returned to the shelter the following day to pick up their new fur baby. They entered the cat room to find Kennel Attendant Monica spending time with Zinger. Monica had bonded with Zinger when she arrived at the shelter and was hoping to adopt her one day. However, it was too late, as Zinger was supposed to be going home with Ken and Tammy.

Tammy placed her open cat carrier on a table as she and Monica attempted to get Zinger down from her perch in the cat room. Zinger, clearly nervous, was not budging from her high up hiding place. While Monica and Tammy consoled Zinger, another cat named Cutie emerged. Cutie, a normally very shy cat, took it upon himself to walk right into the open cat carrier and make himself at home.

“No cat ever voluntarily gets into a carrier,” said Monica. Ken and Tammy took Cutie's actions as a sign that it was meant to be and decided to take our sweet boy home instead. “He chose us. We had to take him home,” said Tammy. Zinger got her happy ending as well with Monica adopting her that same day.

According to their families, both kitties are happy and settling nicely into their new homes. Sometimes, the animal chooses for you. Congratulations to Cutie and Zinger for truly finding their forever homes!