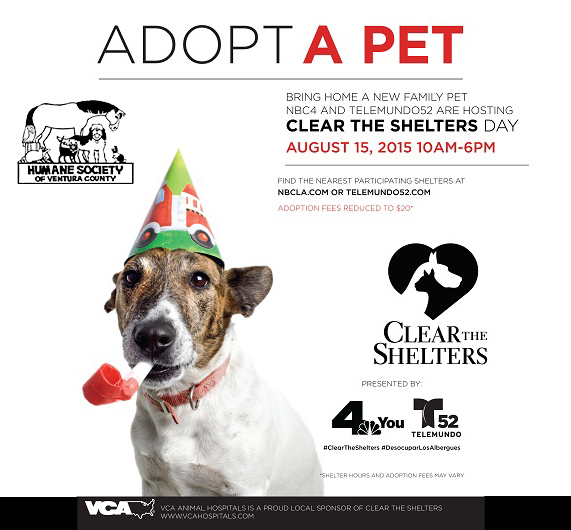 This Saturday, August 15th, hundreds of shelters across the country are taking part in a nationwide push to find homes for pets in need. The Humane Society of Ventura County will be participating in this one-day adoption event at our location here in Ojai.

On this national day of action, participating animal shelters in Southern California will offer a reduced adoption fee of $20, and open their doors from 10 a.m. to 6 p.m. (adoptions stop at 5 p.m.). We will have extra staff and volunteers to help our guests find the perfect new family member!

DOG ADOPTIONS: Included with every dog adoption will be the first DHLPP shot of the series, a rabies vaccine, a medical exam good for up to three days from participating veterinarians, implanting an identification microchip (registration extra), spay or neuter surgery if necessary as well as a collar, ID tag and a leash.

For dog adoptions, a yard check will be performed prior to adoption. In addition to adequate fencing and shelter, those wishing to adopt a pet must provide either proof of ownership of the residence or a rental agreement for that address indicating that pets are allowed.

If there is already a dog in the home a Meet & Greet will be required to ensure the animals will be compatible.

CAT ADOPTIONS: Cat adoptions will include the first FVRCP shot in the series, a leukemia test (if age allows), rabies vaccine, a medical exam good for up to three days from participating veterinarians, deworming, implanting an identification microchip (registration extra), spay or neuter surgery if necessary as well as a safety collar, ID tag and a cardboard carrier.

*Those wishing to adopt a pet must provide either proof of ownership of the residence or a rental agreement for that address indicating that pets are allowed.

Universal City, CA – (July 20, 2015) – NBC4 Southern California and Telemundo 52 announced they are teaming up with nearly 50 animal shelters in more than 400 cities and regions throughout the five counties they serve on a first-of-its-kind pet adoption initiative – Clear the Shelters – on Saturday, August 15.  Part of a national initiative spearheaded by the NBCUniversal Owned Television Stations, Clear the Shelters connects Southern Californians with local animal shelters to find new homes for homeless pets.

“I’m proud that our stations are working with so many local animal shelters throughout the Southland to help rescue thousands of animals,” said NBC4 President and General Manager Steve Carlston.  “This is an exciting initiative to support an important community cause and mobilize millions of people to adopt a pet from their neighborhood shelter.”

“This initiative simplifies the pet adoption process and offers our community an opportunity to welcome a new addition to the family,” said Telemundo 52 Los Angeles President and General Manager Celia Chavez. “I encourage everyone to join us in this day of action to help ‘Clear the Shelters’ and give thousands of homeless animals the chance of a new life.”

On this national day of action, participating animal shelters in Southern California will offer a reduced adoption fee of $20, and open their doors from 10 a.m. to 6 p.m.  Local sponsor VCA Animal Hospitals will have their expert veterinarians and healthcare teams on-site, and all pets adopted during the event will receive a limited health guarantee and a gift bag filled with pet essentials.

NBC4 and Telemundo 52, along with several anchors and reporters, will visit select shelters to celebrate with those who adopt, including a red carpet for adoptive parents and their pets, photo opportunities and a live stream at www.NBCLA.com.

The public is encouraged to begin posting photos with their pets on social media using the hashtag #CleartheShelters and #DesocuparAlbergues. Photos will begin posting on photo galleries atwww.NBCLA.com and www.Telemundo52.com beginning the week of July 20 through August 15.

The Clear the Shelters effort will take place in 19 markets across the United States and Puerto Rico.  On Saturday, August 15, 11 NBC-owned stations, 17 Telemundo-owned stations, the NBCUniversal-owned regional news network necn and more than 300 local animal shelters across the country will match up thousands of homeless pets with new homes. This initiative marks the first time that the NBCUniversal Owned Television Stations have joined forces on an initiative like Clear the Shelters.

For more information about Clear the Shelters and a list of participating shelters, visitwww.nbcla.com and www.telemundo52.com. You can also follow the effort on social media @NBCLA and @Telemundo52 with hasthtag #CleartheShelters @NBCLA and #DesocuparAlbergues @Telemundo52.